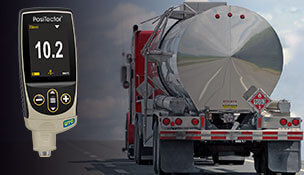 Measurement of Effects of Erosion and Corrosion

How to Measure the Thickness of Plastic Bottles 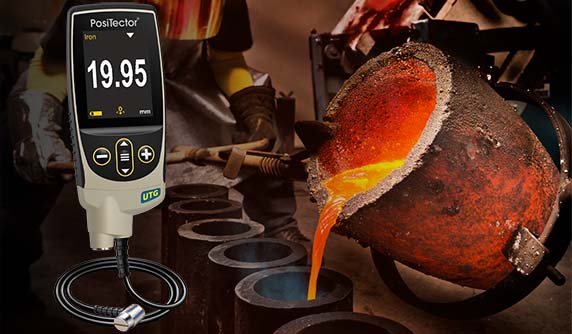 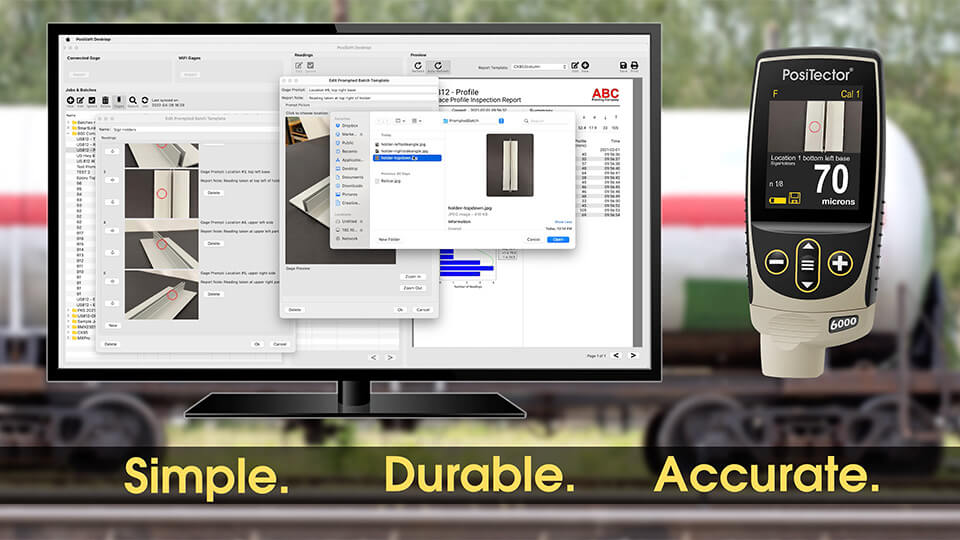 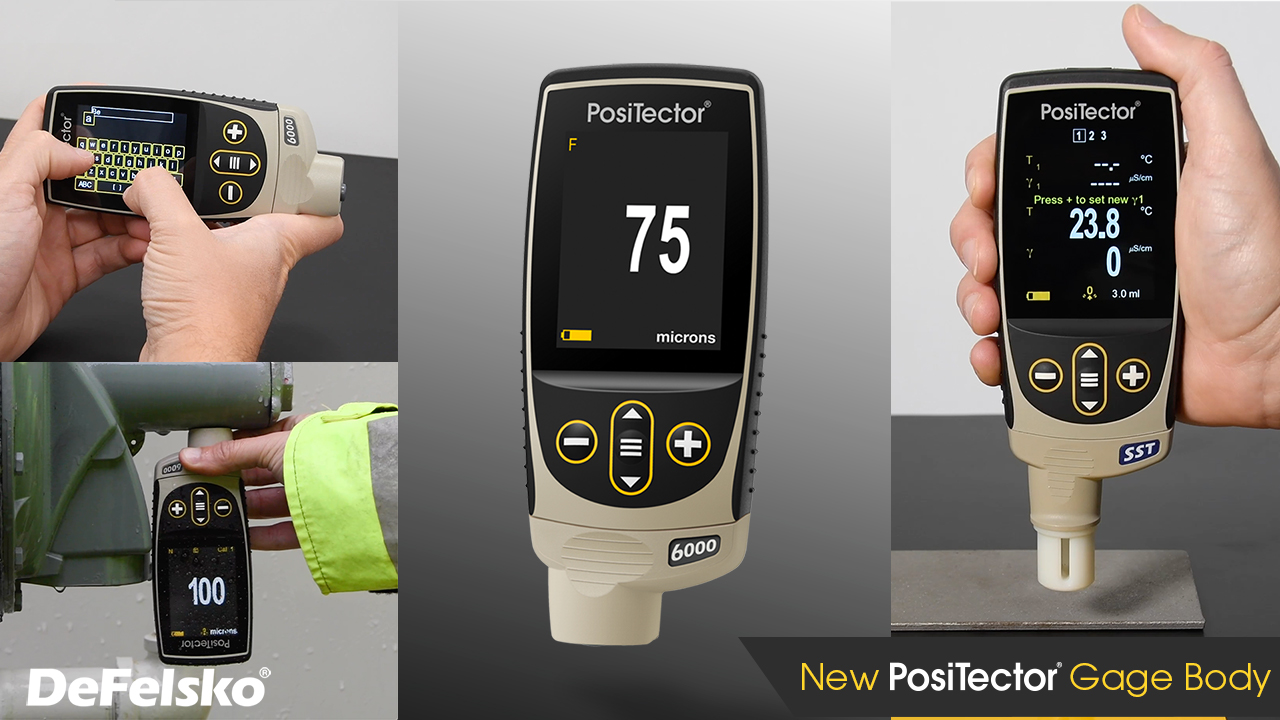 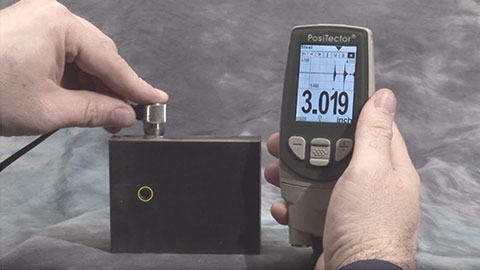 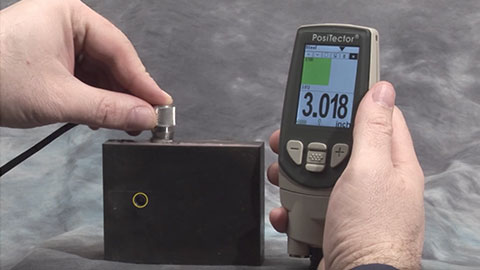 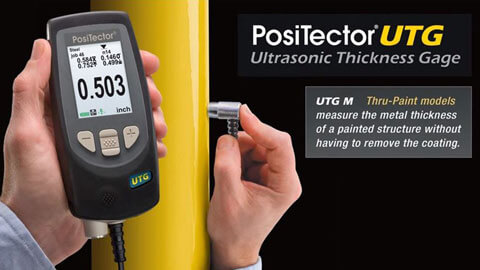 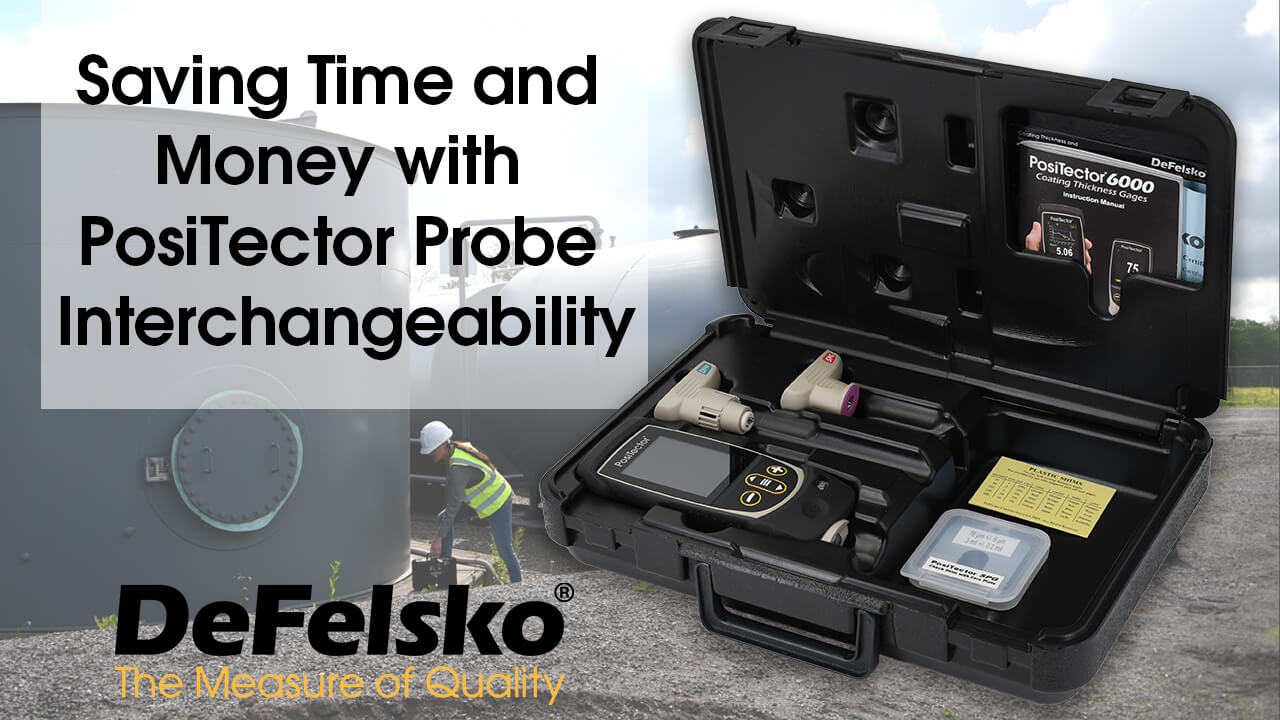 What is Ultrasonic Thickness Measurement?

Ultrasonic thickness measurement techniques are used to measure a wide range of substrates and applications for loss of material thickness due to corrosion or erosion. Ultrasonic Thickness Gauges are designed for measuring the thickness of metallic (cast iron, steel, and aluminum) and non-metallic (ceramics, plastics, and glass) substrates and any other ultrasonic wave-conductor provided it has relatively parallel top and bottom surfaces.

An ultrasonic thickness gauge facilitates rapid inspection of the thickness of large metallic structures at small measurement intervals, providing a high-detail thickness map of a scanned surface. When access is only available from one side of the substrate, ultrasonic wall thickness measurement is the most efficient way to monitor the effects of erosion or corrosion and is instrumental to both quality assurance and quality control.

Corrosion probes measure the wall thickness of materials such as steel, plastic, and more. Ultrasonic Thickness Gauges are ideal for measuring the effects of corrosion or erosion on tanks, pipes, or any structure where access is limited to one side.

Ultrasonic Thickness Tester features Thru-Paint capability to quickly and accurately measure the metal thickness of a painted structure without having to remove the coating. Also ideal for measuring blasted materials and other applications requiring a more durable wear face. 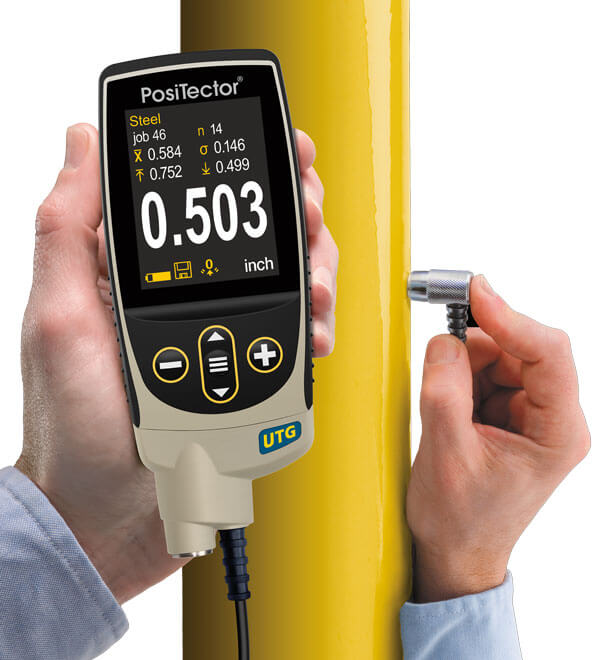 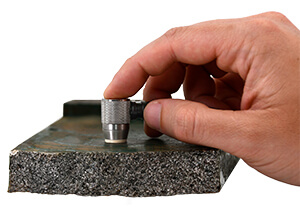 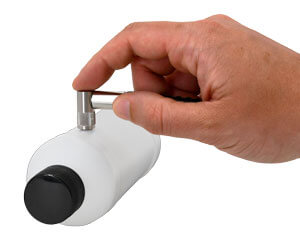 Erosion is the process by which a protective coating or substrate is worn away by friction resulting from repetitive mechanical interaction. Typical causes of erosion include cavitation, impingement by liquid or solid particles, and relative motion against contacting solid surfaces or fluids.

Corrosion is the process by which a substrate and its properties are damaged or worn away by a chemical action or change. In metals, deterioration attributed to corrosion is most often caused by an oxidation process.

Using non-destructive inspection methods minimize safety concerns, ensure code compliance, and reduce the frequency of major repairs (and subsequently costs). As an example, marine applications have a significant risk of catastrophic substrate failure due to undetected substrate corrosion or erosion. However, costs associated with corrosion or erosion damage can be more subtle. Consider the case of a propeller blade that has experienced wear or damage. A likely impact is a decrease in the efficiency of the propeller, translating directly to a decrease in horsepower and an increase in turbulence (vibration). This results in a decrease in maximum speed and an increase in fuel consumption. Furthermore, cavitation caused by the damaged propeller creates a surrounding environment that is even more damaging to the propeller itself.

For more information on ultrasonic thickness testing read our article, “Measurement of Effects of Erosion and Corrosion” here.

What are some UT Measurement Applications?

With ultrasonic thickness gauges, an accurate measurement of the remaining wall thickness of a substrate can be taken on pipes, pressure vessels, storage tanks, boilers, or other equipment prone to erosion or corrosion.

Though many industries are affected by erosion and corrosion, the marine atmosphere is one of the most aggressive corrosion environments. Corrosion rates are affected by several elements including sea water, humidity, wind, temperature, airborne contaminants, and biological organisms. Erosion is also common in marine applications due to abrasion from the impact of water and contaminate particles, impingement due to turbulence in high speed liquids, and cavitation due to pressure waves produced by air bubbles. Erosion not only affects the substrate itself but may also damage protective coatings, increasing the likelihood of substrate corrosion. Ships, marinas, pipelines, offshore structures, and desalination plants are all systems that are subject to varying levels of marine erosion and corrosion.

The PosiTector UTG C Ultrasonic Thickness Gauge (Corrosion) single echo probe uses a dual-element transducer, a focused “V-path”, and V-path compensation to accurately measure the thickness of metals with heavy corrosion or pitting. The UTG C single echo probe will not ignore the thickness of the exterior coating: for best measurement accuracy, it may be necessary to remove any coating present at the point of measurement.

The PosiTector UTG M Ultrasonic Thickness Gauge (Multi-echo) probe uses a single element transducer to accurately measure the metal thickness of a new or lightly corroded structure while ignoring the thickness of protective coatings. The ultrasonic beam travels in a straight path to the material’s back wall at 90° relative to the surface. When three consecutive back wall echoes are detected, the probe makes a time-based calculation to eliminate the coating thickness from the gauge reading.

The PosiTector UTG P Ultrasonic Thickness Gauge (Precision) probe uses a single element delay line transducer to accurately measure the thickness of thin materials including plastics and metals. It automatically switches between single-echo or multiple-echo modes depending on material and thickness.

What are some common material velocities?

The table below lists the longitudinal wave ultrasonic velocities of some common materials typically measured by ultrasonic thickness gauges. Specific material velocities may vary due to temperature, composition, grain, and other factors. For best accuracy, check the velocity on a sample of known thickness.

Select from a list of common pre-programmed material velocities or enter your own with ease.

Single-echo PosiTector UTG C probes feature a dual element transducer with automatic V-Path compensation. Thickness is determined by measuring t1 (uncoated) or t2 (coated), dividing it by two and then multiplying by the velocity of sound for that material (steel). See Figure 1. 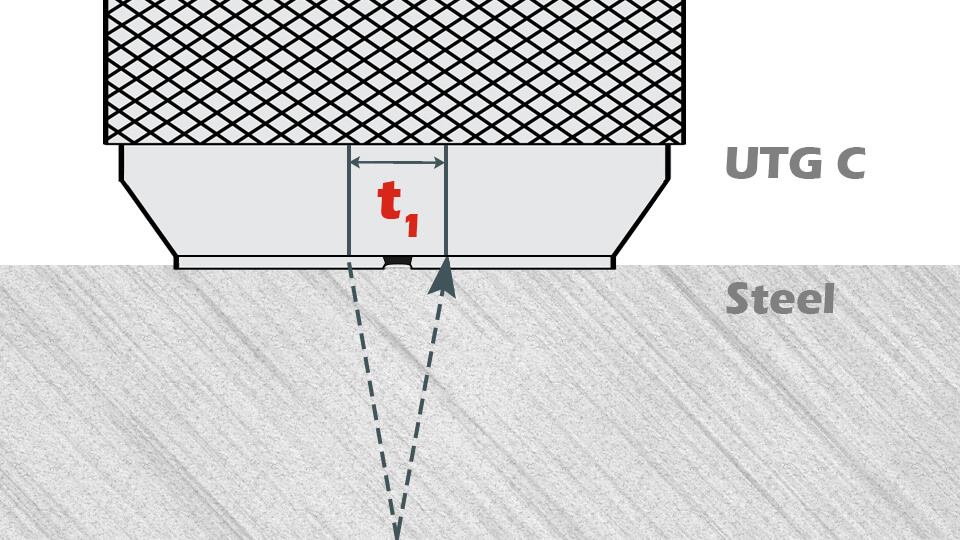 For uncoated materials, t1 related directly to material thickness. When a material is coated, the propagation time is increased and is shown above as t2.

Coatings such as paint have a slower velocity of sound than that of metal. Thus the single echo technique will produce a thickness result greater than the actual combined coating and metal thickness. The result will include a significantly higher, unknown value of paint thickness. Therefore, it is not a simple matter of measuring the thickness of the paint and subtracting it from the single echo measurement result. 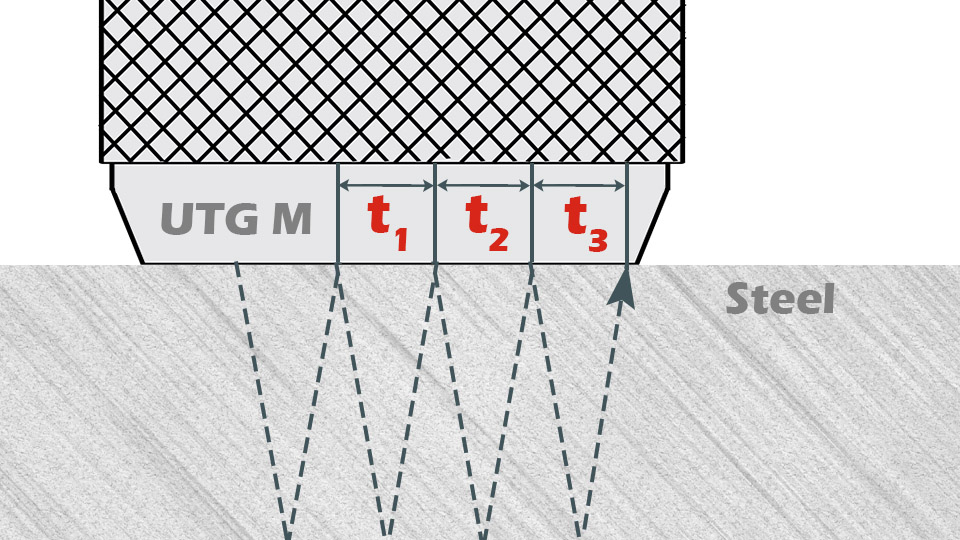 In Figure 2 above, multiple echo mode measures only the time between echoes. Regardless of whether the steel is coated or not, all times between echoes are the same. In multiple-echo mode, the thickness meter determines thickness by measuring t1 + t2 + t3, dividing it by six and then multiplying by the velocity of sound for that material. The resultant thickness calculation made by the instrument is therefore an accurate measurement of the steel thickness only, disregarding the coating thickness.

The velocity of sound is expressed in inches per microsecond or meters per second. It is different for all materials. For example, sound travels through steel faster (~0.233 in/µs) than it travels through plastic (~0.086 in/µs).

Answer will go here when ready 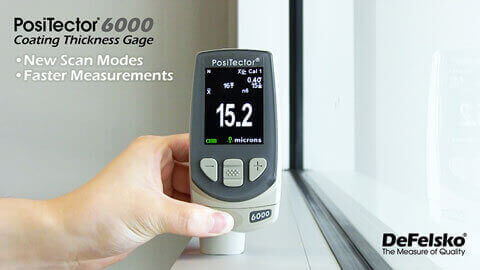 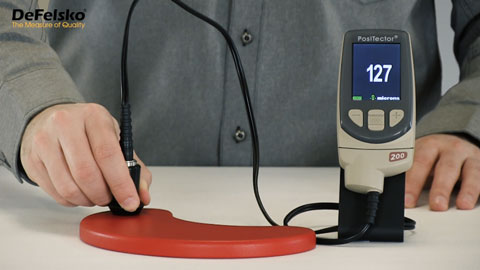 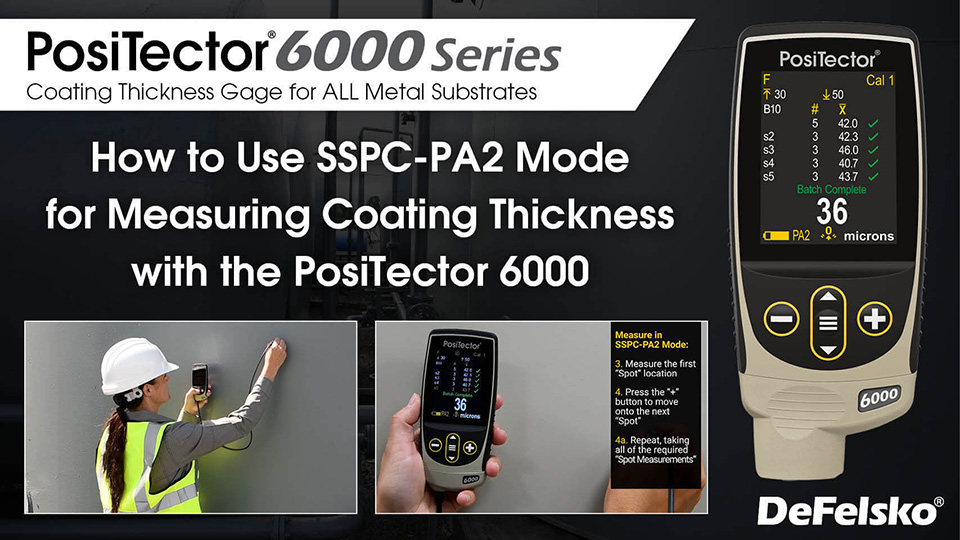 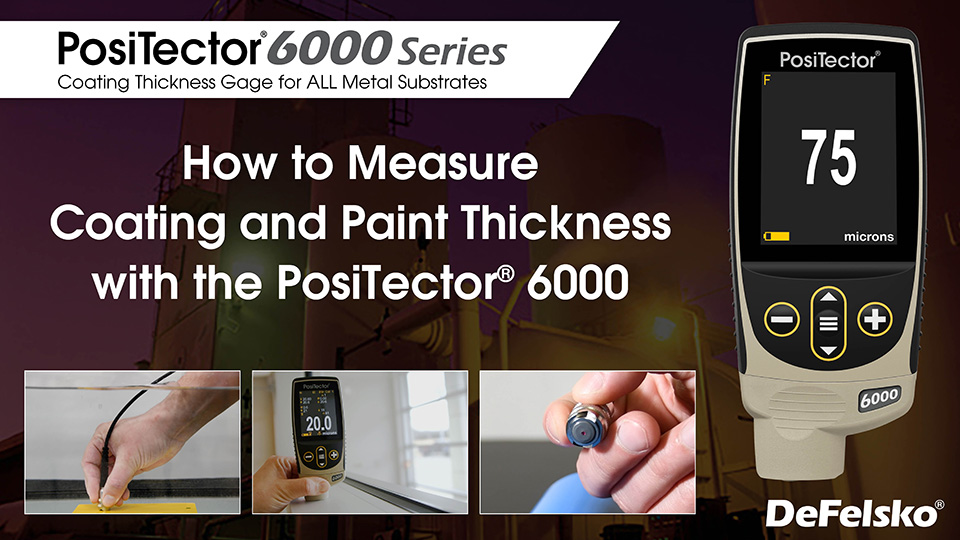 How to Measure Coating and Paint Thickness with the PosiTector 6000 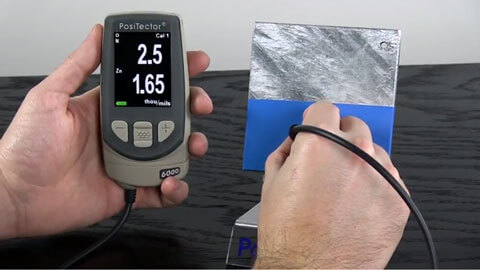 How is Coating Thickness Measured?

How to Measure Powder Coating Thickness on Steel, Aluminum, or Wood